Zchash is a unique project that allows users to remain anonymous. It is also unique in other terms. It has the highest inflation rate of all cryptocurrencies.

Bitcoin guarantees only partial anonymity. Its transactions are public and permanent, and in many of BTC exchanges users need to be verified with an ID card. This is not much information, of course, but it does not provide full anonymity, which the creators of Zcash have decided to guarantee.

When creating a Zcash wallet, the wallet offers two types of addresses: t-addr – public and z-addr – private. This gives users the opportunity to choose the privacy of the transaction they are making. If they wish, Zcash offers complete payment confidentiality, automatically hiding the sender, recipient, and value of all transactions.

Zcash offers 21 million coins which will be mined by 2032, and the first block of this cryptocurrency was mined in October 2016. As with Bitcoin, the reward for the block is halved every 4 years. The third Bitcoin Halving is an event that took place on May 11th, halving Zcash will take place in 2020.

The first Zcash halving will help solve the inflation problem

In general, cryptocurrencies tend to increase in value after halving. For example, the first halving Litecoin, which took place in 2019, brought him significant increases in its price. The same can be said for the 2 previous Bitcoin havings. The increases are not immediate, but they occur within a few months after the prize is reduced.

Several investors are suggesting changes in Bitcoin prices and predict that Zcoin will show similar behavior. No wonder, after all, it is Bitcoin that has the greatest impact on the value of all altcoins. There is another factor influencing a positive attitude towards the increase in the value of this currency.

The payment of Zcash developers depends on the crypto course, as the money for this is obtained from Founding Reward. It represents 20% of the reward for the mined block. There have been a lot of code audits with this money, so ZEC looks really good in this regard, but this prize is a constant decrease in Zcash price. 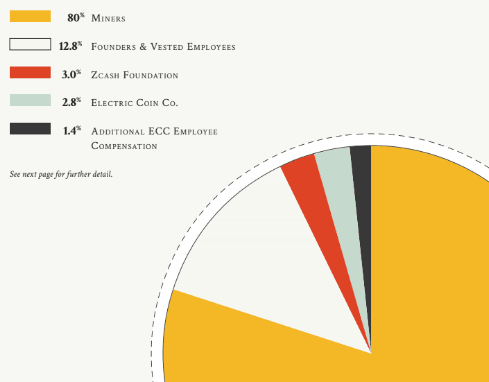 This is the form of financing of Electric Coin Company, in which people responsible for Zcash work. However, in 2020 the founding reward will cease to apply and it is not known how ECC will be financed. How will this affect further development and the price of Zcash? We will find out at the end of the year.