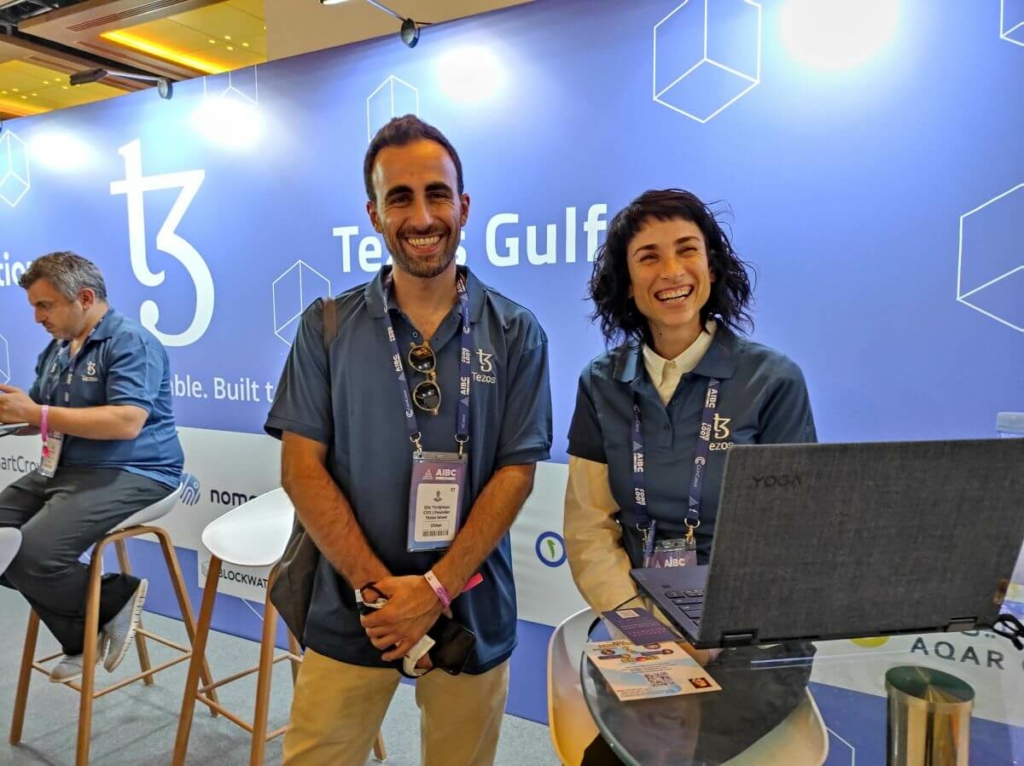 At AIBC Summit in Dubai we met a Tezos Israel team and had a little chat with their CEO & Founder – Elie Terdjman and Efrat Kaufmann – Head of Partnerships.

Tezos Israel – one part of a big thing

Tezos Israel is a delegation of the great Tezos Foundation – the huge blockchain protocol that has about 16 representations all over the world and people which we have met are one of them. They work in an innovation lab in Israel with the goal to increase the usability and acknowledgement for the Tezos blockchain solution.

The team counts 10 people, but not everybody is a full-time employee.

They are currently working on a new boutique NFTGallery, as it is called, it will be NFT Tez as it will be powered by Tezos and it won’t be an open platform or just a regular marketplace.

It will be a full service allowing artists to be creative by doing all the technical details for them and also taking care of all the marketing, they just need to create the art and it will be supervised. Of course, they strive for quality, not quantity.

Elie thinks one of the obstacles is always – regulations! Especially when it comes to dealing with blockchain, the sensitivity increases also because the project is incorporating the token that you are dealing with. So it’s really important for Tezos to separate these two definitions. And that was the biggest challenge to explain and to teach the government and the regulators.

Tezos has been around for about a year and a half and like most of the time it was a huge challenge trying to make a new business during COVID-19 where most of the work is about commitment. Tezos team sees themselves as an instrument that is helping entrepreneurs to develop their projects, and they faced many problems during the pandemic.

Why did Elie start working with Tezos?

Elie said that he saw the demand because Israel is very high-tech oriented and it’s a start-up nation because blockchain and critters was starting to grow. What is more, he saw that there are not enough people to explain the basics of blockchain in a proper way.

Furthermore, Tezos was really close to Elie’s heart – he has been interpreting for a very long time already since 2012. He knows a big part of the community in Israel and he started to work with Tezos because simply loved the projects.

What does the CEO of Tezos Israel think about the future of crypto?

Elie thinks that crypto will become parallel with the current financial environments. Meaning that the technology will really grow fast and will be incorporated  with the current system that we have. After that it will  slowly become one with the “Old Financial” and this is where crypto won’t be called crypto anymore, but the “New Finance”.