Hard fork and soft fork – siblings, but so different 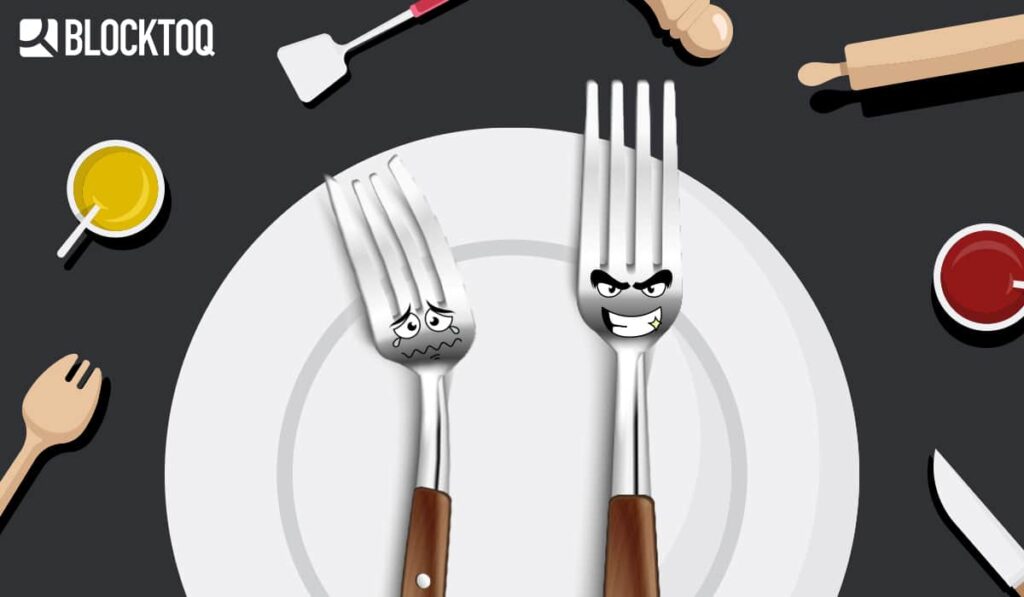 If you have been in the cryptocurrency environment for some time, you probably met with terms such as hard fork or soft fork, but might not know exactly what they mean. In this article, we will look at their definitions and discuss some of the more famous forks.

Before we explain this, let us remind you that cryptocurrencies are based on blockchain technology. It’s a chain of blocks (as the name suggests) in which transactions are saved. Blockchain is a distributed and decentralized database, operating in the open source model, with peer-to-peer architecture. The advantages of blockchain technology are security, transparency, decentralization, and anonymity.

So, we have theoretically a single main chain of blocks, where transactions are approved by participants who agreed on certain rules. However, if for some reason – deliberately or accidentally – a division of this chain happens, that’s when we’re dealing with forks. This situation occurs when two blocks are mined at the same time and it is not known which chain is the dominant one. It can also occur when new rules are set intentionally.

Sometimes we deal with the so-called temporary forks, when further digging of blocks takes place and the network rejects one of the chains. This usually happens with unintentional forks. The situation is different in the case of rule changes of how the network operates. Users then have to decide which chain they will support. If the opinions are divided, a so-called hard fork occurs, which is not temporary and has serious consequences, because it can create a new cryptocurrency.

As an example, Bitcoin Gold hard fork should be mentioned – the change in protocol was aimed at favouring GPU excavators over ASIC ones, by changing a special algorithm. This change took place in October 2017. There are several other Bitcoin hard forks. The most popular is Bitcoin Cash. It took place in August 2017. This cryptocurrency currently ranks among the top 5 at market capitalization according to CoinMarketCap. Hard fork occurred due to a network update caused by the need to increase block capacity – from 1MB up to 8MB. The Bitcoin SV and Bitcoin ABC are also relatively young Bitcoin forks. We recently reported that Bitcoin SV was in trouble after its creator, Craig Wright, told the world that he is the creator of Bitcoin, the famous Satoshi Nakamoto. This led to the removal of BSV cryptocurrency pairs from the world’s largest cryptocurrency exchange platform – Binance.

There are also many hard forks of other cryptocurrencies, not only Bitcoin. One of the most known is Ethereum’s hard fork, called Ethereum Classic. It happened due to an error found in the DAO platform code. One hacker noticed this, changed several lines of code and gained access to ETH coins worth about $60 million.

This led to the division within the Ethereum community. On the voting path, it was decided to conduct a hard fork to withdraw the whole event. Some members did not agree to such a solution and decided to continue supporting the old blockchain.

What is soft fork?

Maybe you’ve also heard about the so-called soft forks. It simply means updating the network. Such a change in the protocol does not require network division, and the changes are backwards compatible. For example, if new software reduces the block size from 1MB to 500kb, hard fork does not occur, because new policies are accepted by older software. Soft fork does not, therefore, create a new cryptocurrency. This is happening with hard forks, because these new changes are not compatible with existing rules (e.g, increasing the block capacity).

In summary, the soft fork is synonymous with a protocol update, users do not experience significant changes to the network, and it doesn’t create a new cryptocurrency. On the other hand, hard forks are a real change of the blockchain, where the original change (e.g. Bitcoin) and the newly created one (e.g. Bitcoin SV) exist together.

We hope that the above definitions are understandable to you. If you are interested in further broadening your knowledge – for example, how cryptocurrency trading works – we encourage you to read our beginner’s glossary.