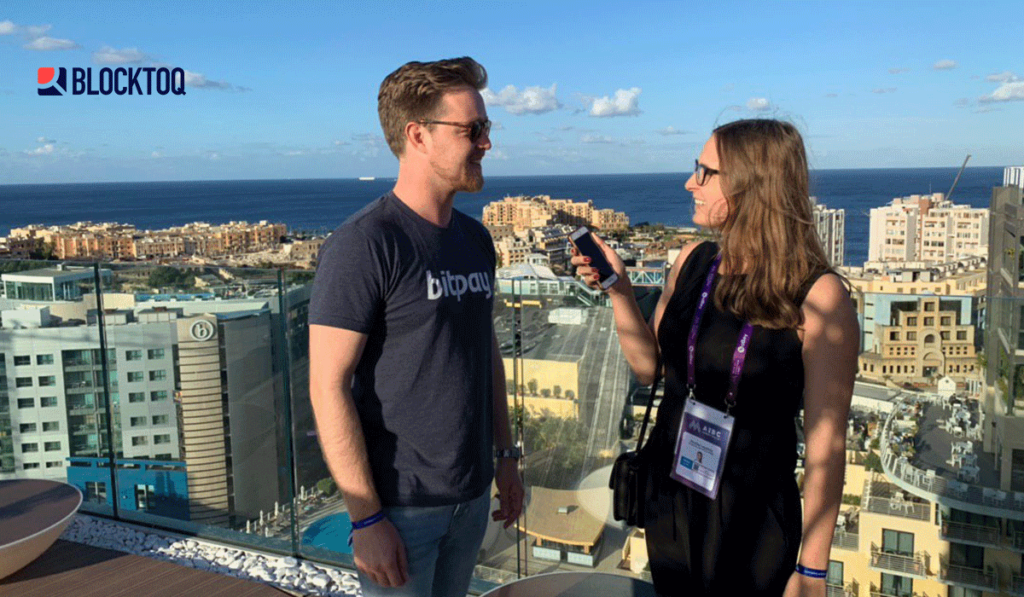 Hi, could you tell a little bit about yourself and your company?
I’m Max Barendregt from BitPay. It is the largest bitcoin/cryptocurrencies payment processor in the industry. We’ve been around since 2011, so we’re also one of the oldest or maybe even the oldest bitcoin company that is still standing. What we do in BitPay is: we allow businesses to accept cryptocurrency as a method of payment from their customers and we settle those businesses in their local currency. In that way, they are able to allow their clients to pay in cryptocurrencies, however, there is no difference for those places – they receive money completely normal as it would be a normal credit card payment.

How long have you been working in BitPay?
I, myself, have been working now for 1,5 year at BitPay. But my experience with cryptocurrencies is actually much longer. Actually, when I started working, I had a partnership with BitPay. Therefore, my relationship with BitPay is much longer than 1,5 year. What’s more, I’ve been using them all of the time – to make payments in cryptocurrencies, to order food, or any other merchants when there is such a possibility.

How did you start your adventure with cryptocurrencies?
It was actually a funny story. Back to university, we had a project where we had to compare medicine in the laboratory. We needed to compare illegal medicine with legal medicine. The professor sent us to the dark web…

Whaaaat?
… to buy illegal medicines. And then you, of course, have to pay with Bitcoin and I thought that it is interesting because apparently there is a currency which is globally accepted, goes over the internet and I did not really take care about the molecular structure of the medicine. I knew that the bitcoin could be something revolutionary.

So what you were studying?
Science, business and innovation. It was quite a technical study but it was not the computer science part of the study where got in touch with bitcoin. Because it was actually through the chemistry part.

So this illegal drug… it was cannabis?
Well… not. It was viagra in fact (laughing).

Well, what the result of the study then?
I actually… do not remember. We chose viagra because it was most available, easiest to find online.

What happened then? Did you start to work in the company connected with cryptocurrency?
So what I did then… I saw that it was gonna be big and back then there were already some e-commerce websites accepting cryptocurrencies. But in physical commerce, street shops, there was really not a lot of adoption – bars, shops and restaurants that would accept crypto. We believed that the reason was not enough education for those shopkeepers to learn how they could easily accept it. So we wanted to bridge that gap of knowledge by providing them with POS (Point of Sales) terminals to accept payments, the processor that would allow them to get their currency in return… and all of the knowledge that would need to get started with crypto. The company was called BitStraat. We couldn’t process payments by ourselves, so that’s when we pitched our products to several crypto payments providers and the partnership with BitPay seemed the best match. So, we decided to start this partnership with them where we would set out all of POS systems in the shops. BitPay did the payment processing for them. In the beginning, it worked really well because whenever we would have another shop that would accept crypto, we would publicize it on the internet, different forums, news websites. What’s happened then was that – the crypto community back then (this is in 2013) was soooo fanatic, I mean, they still are, but it’s a lot, lot bigger. This first group of people back then was really small and fanatic. What they would do was they would go to these shops just because they could pay with bitcoin. That was great because shop owners were like “okay, I now have people in my shop that they would never have been there before. So, it’s perfect.” However, at one point we started realising that we are just driving hype train because we were not really solving a problem. I mean, in the sense that in the physical shop in the Netherlands, at least, there’s no really a problem with payment. It is very easy to pay cash or cards. The payment is cheap for the consumer and a shopkeeper. So there was no really a problem that we were solving there. So, that’s when we decided to stop the project. But BitPay kept continuing doing the amazing stuff in the online e-commerce space and B2B area. That’s why 1,5 year later I decided to join them again.

So, could you elaborate on education in the area of blockchain, cryptocurrencies?
I definitely think that people should learn about blockchain technology in high school. Also, I feel that in my work… what I’m doing it’s just educating. There is a big lack of knowledge in education around cryptocurrencies and blockchain. People still easily hold on to the stigma of criminality and darknet markets. So, definitely, it deserves a place in academic curriculum for it.

What do you think about the future of cryptocurrencies?
Unfortunately, I don’t have a glass globe to look at and do the price prediction but I think that bitcoin and blockchain have proved that they can stick around for long enough that it’s safe to say that they will not go away and because of that it can only go bigger. In what shape that’s gonna be or what will be the future use case that it would be used most – that’s something that we still have to wait.

Our news portal is targeted for beginners. Do you have any advice for people who would like to start their adventure with this world?
I’d say… first of all, just get started. Just do it. Don’t keep too long thinking of what would be the best way to go about things, just try things out. Also, ask advice. Especially from people, they are not in the blockchain industry but in the traditional finance industry. In lots of cases, there is no given enough credibility to what they have achieved so far. I think, eventually, blockchain will be like a revolution but there is still a lot to be learnt from the traditional finance industry.

What are the most possible dangers for cryptocurrencies?
I’d say the projects that have no real added value. There are only for the sake of generating new, quick money without solving the problem and those projects are not a big issue. So those projects in themselves, they’re coming and they are fading away. But like in the terms of the credibility of the projects connected with blockchain they can really slow it down if we keep having so much attention and a podium for all of these projects which are not adding value.

Are there any books/websites you would recommend for beginners?
Well, in terms of books, it’s always good to get educated around cryptocurrency itself. If you get started, and therefore I really like books and talks from Andreas M. Antonopoulos. It’s not a book written by himself but it is a collection of all the different talks which he gave, put in chronological order. So instead of going through all of the videos on youtube, it’s like collected in one book. I’d say that’s basically it’s the one that paints a good picture where the industry can go.

What are the aims for BitPay in the nearest future?
So, adding more cryptocurrencies. We have a crypto wallet also which can be downloaded from the app store. We want to add more functionalities to the wallet, so people could do more than just sending and receiving crypto. Also, we see a big future for stablecoins. Because a payment method which is fluctuating heavily everyday in value, it’s not an ideal payment method. That’s still a problem that half of the world is not connected to the banking system. So, if you use stablecoin, you will have benefits of blockchain technology and the security and speed of it but you will still have cryptocurrency which value is relatively stable, which is a great use case for businesses.

Okay, I think that I’ve gathered enough information. Thank you for our conversion.
Thank you. 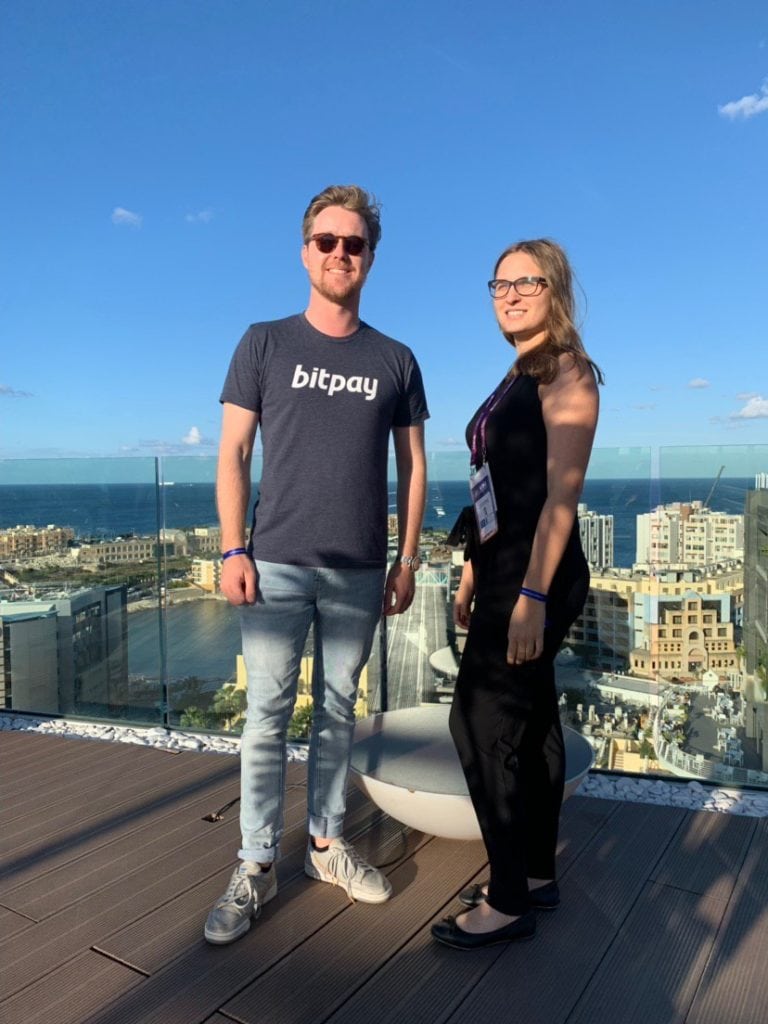